Like many athletes attempting triathlon proficiency, Deb Johansen thought the swim portion would derail her goal.
“When I’d get in the water I’d ask myself if I was trying to be something that I’m not,” said the 46-year-old competitive runner who lives in Indian Harbour Beach. “I’d wonder if I just should stick with running and duathlons and leave triathlon alone.”
It certainly wasn’t a lack of training that left Johansen doubting her abilities. The chief operations administrator for MIMA had diligently logged miles of yardage in the pool improving her technique, building endurance and increasing her speed. The preparation also included frequent sessions in the ocean or river, even on days that were windblown and cold.
In spite of her increasing physical prowess, however, Johansen continued to be greeted by an overwhelming sense of anxiety and frustration as she lined up at the sandy starting lines of multiple races.
“I just couldn’t get past all the bodies,” she said of the frenetic and often crowded wave starts.
On the advice of her coach, Johansen attended a mental training lecture given by sports psychologist Dr. Virginia Savage to the participants of Running Zone’s marathon training camp.
And four days later, after applying some of Savage’s principles, Johansen returned home from the Key Biscayne Triathlon with a second-place age group award and a newfound sense of confidence and belonging.
“The night before the race, I wrote down some positive things based on Dr. Savage’s recommendations,” Johansen said. “I felt real relaxed the next morning.”
Johansen’s focused calm allowed her to approach her challenges with a different perception and attitude.
“In the water, instead of looking for the bodies, I started focusing on the spaces between the bodies — I was looking at the flipside,” she said. “I told my husband after the race that the different way of thinking reminded me of those old black and white trick photos where you can either see an old hag or a beautiful woman in the same picture, depending on your perception.”
And for many people perception is reality.
“People don’t focus their mind in a way that benefits their performance,” said Savage, whose focus helped her to excel at sports despite childhood polio and later, a body severely injured after falling off the mountain face she was climbing. “Generally, people’s thoughts are focused on what they are doing wrong, beating themselves up or on something else that is negative.”
Although the six Ironman World Championship titles won by both Mark Allen and Natasha Badman are widely attributed to mental discipline, most amateur athletes devote little or no time in the pursuit of increased cerebral capability.
“I really don’t think that people know where to start,” said Savage. “They don’t have the same kind of tools or as many that are available for physical training.”
Among those tools, Savage said, are:

Observe and change the language: “It is important to begin to observe the language of what you think and say and it is most apparent when you’re talking with someone. Ask your friends and family to help point out when you are being negative,” she said. “It helps to substitute the word ‘but’ for ‘and’. Instead of saying ‘I’d like to do this race but,’ say ‘I’d like to do this race and,’ Then substitute something positive about what or how you’ll do it.”
Set clear outcome and mastery goals: “You have to be clear in your mind about what you want — this is the outcome goal. It is important to identify what is distracting you from achieving it and then you know where to begin to resolve those challenges.”
“Resolving those challenges become the mastery goals and, in addition to providing us a path to meet the outcome goal, achieving them keeps us moving forward and positive about our progress.
“It also helps to write the goal down and to speak about it. As you do so, you begin to clarify and understand why you want it and how you are going to accomplish it. Once you have a plan, it is not so easy to become distracted.”
Imagine or visualize excellence: “Tap into a performance where everything clicked for you and practice feeling how you felt at that time. Was it strong, confident, fluid, powerful, calm? As you are visualizing, do something physical that you can also do during the race, such as tapping two fingers together. When you tap those fingers during the race, you’ll trigger the same sense of ease or power that you’ve practiced and generate energy you didn’t think you had.
Practice mental training: “It is really important to have a strategy to train your mind and then do so consistently. It doesn’t have to be a long period of time, but it needs to be done every day. Just like you can’t learn everything about triathlon at one time, mental training takes practice.”
Make positive choices: “It is important to recognize and acknowledge that everything we do is our choice and the choice comes from within us. When someone says ‘I can’t do this or that’, they are making their decision. Henry Ford said ‘whether you think you can or think you can’t, you’re right.’ ”
* Patti Sponsler has lived in Brevard county for more than four decades and has been a runner and triathlete for 20-plus years. She is passionate about bringing to life those sports and their athletes. With undergrad and graduate degrees in business, Sponsler is a self-described ‘business geek’. She is also a certified USA Triathlon level I coach and enjoys surfing and goofing off in Cocoa Beach with her husband and her dogs. 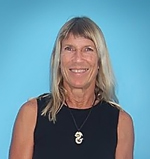 Dr. Virginia Savage holds a Ph.D. in Sport Psychology, complimented by 30 years of professional and personal athletic accomplishments. Learning from experience is a hallmark of her character with a … END_OF_DOCUMENT_TOKEN_TO_BE_REPLACED